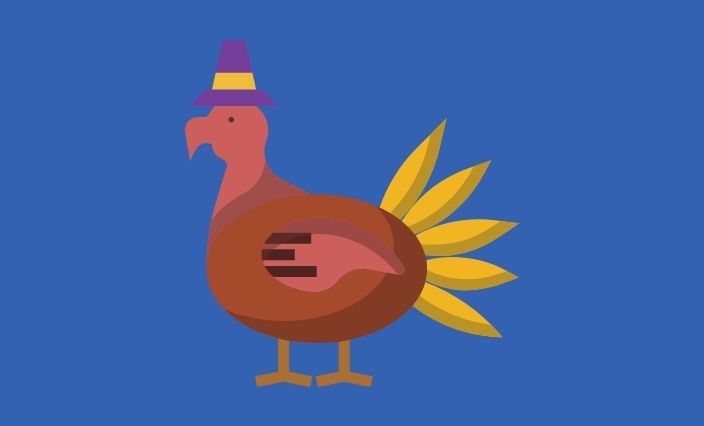 Here we are, Thanksgiving 2021 is upon us and we are still in the midst of a pandemic. While COVID-19 vaccines are available the Coronavirus is putting a damper on the holiday festivities for a second year in a row. Many families won’t be able to celebrate the tradition in the same manner as previous years. Turkey dinners may be socially distant, with many family gatherings being smaller, or not occurring at all.  While the Coronavirus may be forcing us to change the way we celebrate the Thanksgiving holiday, it doesn’t mean we shouldn’t celebrate it at all.  Below are are some fun trivia questions about the Thanksgiving holiday that you can use as a fun activity over the holiday.

What does Thanksgiving celebrate?

It began as a holiday to rejoice in the harvest and blessings that came throughout the year.

When was Thanksgiving first created?

Celebrations go back to the 16th century. The Commonwealth of Virginia held Thanksgiving services as early as 1607. A more prominent celebration in history occurred in 1621 which is often given credit as being the first Thanksgiving.

Who celebrated the first Thanksgiving?

The first Thanksgiving feast was attended by the Pilgrims and Wampanoag tribe members.

Where did the first Thanksgiving take place?

In the Plymouth colony in what is now Massachusetts.

When did Thanksgiving become a national holiday in the United States?

While president Abraham Lincoln proclaimed it a holiday on October 3, 1863, it was Franklin D. Roosevelt who on December 26, 1941 signed into law as a federal holiday.

What day is Thanksgiving celebrated on?

The national holiday of Thanksgiving falls on the fourth Thursday in November. In 2021, it is on November 25th.

Is Thanksgiving only celebrated in the United States?

No, Canada also celebrates Thanksgiving, but it’s celebrated there on the second Monday of October. Liberia and Greneda celebrate the holiday as well.

Why do we eat Turkey on Thanksgiving?

Is Thanksgiving a religious holiday?

While rooted in cultural tradition and religion, in modern times religion has no part of the Thanksgiving and it’s secular in nature.

The Detroit Lions and Dallas Cowboys.  The Lions started their tradition in 1934, and the Cowboys followed suit many years later in 1966.  Both teams started their participation as a way to attract more fans.

The NFL Games scheduled for Thanksgiving 2021 are:

What company sells the most turkeys?

Butterball sells over 1.3 billion pounds of turkey each year. They even have a Turkey Talk Line for consumers who need a little extra help in the kitchen.

How much did the heaviest turkey of all time weigh?

According to the Guinness Book of World Records, the largest turkey topped the scales at 86 pounts.

Macy’s has sponsored the NYC parade which is well known for its extravagant floats. About 50 million people watch the parade each year.

Which US city is home to the oldest Thanksgiving Day parade?

Where do most turkeys in the United States come from?

The state of Minnesota raises over 41 million turkeys each year.

What type of pie is commonly associated with a traditional Thanksgiving meal?

Pumpkin pie, it started earning a spot as the celebratory meal in the 18th century.

How many pumpking pies are consumed each Thanksgiving?

What are the menu items of a traditional Thanksgiving meal?

While it varies depending on the area of the country, common menu items consist of roasted turkey, stuffing, mashed potatoes, cranberry sauce, rolls and of course, pumpkin pie.

What time of day is Thanksgiving meal served?

It’s commonly served in the afternoon or early evenings, anywhere from 2:00-5:00pm. But there’s no wrong time for a Thanksgiving feast.

Happy Thanksgiving from the folks at Trivia20. If you enjoyed these questions, try out some of our online trivia games found here.  They're perfect for virtual group events, and family get-togethers when you're unable to connect in person.