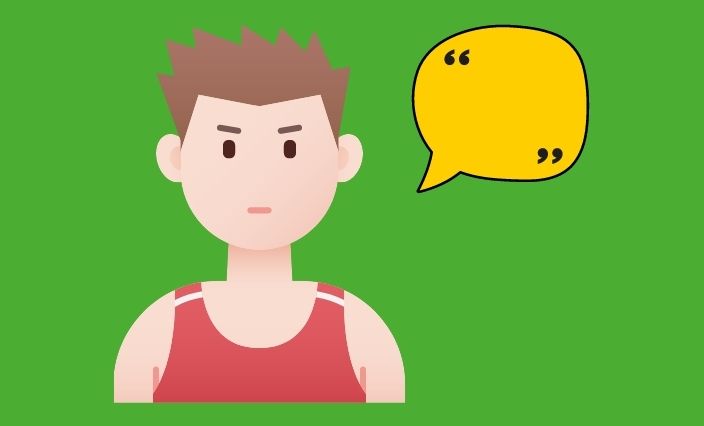 The sporting world generates fans across the world. From football to soccer, to baseball to hockey, and the Olympic games, just about everyone gets some enjoyment from at least one of the sports. Sports can be a great unifier, bringing together fans who may not have much else in common other than wearing the same jersey.  Fans enjoy the wins together and suffer through the losses in unity. The games and matches bring memories of top plays. Memories are also formed by the quotes from the players, coaches and announcers. Below we’ve put together a fun sports quote quiz. See if you can name the person who is associated with the famous sports quote.

10 Famous Quotes From The World of Sports

Allen Iverson said the famous quote in a press conference after his team, the Philadelphia 76ers were shown the door early in the playoffs and he was being questioned by a reporter about his dedication to practicing. He uttered the word, practice, a total of 22 times during the interview.

Michael Phelps gave life to this phrase and he can back it up too. He brought home 28 Olympic medals in team and individual swimming events and is the most decorated Olympian of all time...the best!

Billie Jean King said this phrase about social change, and she definitely did bring change to the world of women’s tennis. She helped bridge the pay gap and work toward bringing the prize money for women’s tournaments to an equal level of what the men get paid. Hats off to Billie and her hard work.

Manny Pacquiao is the man behind this boxing quote. He’s a retired Filipino boxer who brought home twelve major world championship titles. Bonus trivia: the longevity of his career makes him the only boxer to win world championships in four different decades. The 1990s, 2000s, 2010s, and 2020s.. That’s a lot of punches thrown and taken. Well done PacMan, well done!

Ronda “Rowdy” Rousey is the woman responsible for this sports quote after being questioned about her career in mixed martial arts (MMA).  And here’s a little bonus trivia for you, Rousey won a gold medal in judo in the Summer Olympic Games of 2008. This feat made her the first American woman to win a gold medal in the sport. Way to go Rowdy!

Peyton Manning Peyton Manning was choked up when he said this great football sports quote during his retirement speech on March 7, 2016. Without a doubt one of the greatest quarterbacks to ever play the game, and a sure fire first ballot Hall of Famer, he definitely studied the film and the playbook and proved to be a very cerebral quarterback.

John Madden is the man who said this beauty. As a former NFL player and coach he brought a great perspective to the world of announcing. This is just one of the many quotes that kept viewers entertained and chuckling during the broadcast of Monday Night Football games. Bonus trivia on Madden, he didn’t like to fly in airplanes and took his last flight in 1979. After that he took trains and even had a decked out Madden bus that he traveled in to get to the games he announced around the country.

Danica Patrick is the woman behind this quote. She broke barriers in the world of IndyCar racing. Her victory in the 2008 Indy Japan 300 gave her the claim to fame of being the first woman to win an IndyCar Series race.

Mike Krzyzewski is the man who made this quote famous. As the long time head coach of the Duke men’s basketball team he would know a thing or two about teamwork. During his tenure, his teams brought home five NCAA Division I titles. Good job Mike, you sure do know how to coach a good team.

Jackie Robinson is the man who made this quote famous. Robinson broke the color barrier in the game of baseball when in 1947 he became the first African American to start in Major League Baseball.  Bonus trivia, his jersey number 42, was retired by all teams in the MLB in 1997.  A well deserved honor for a man who brought so much to the game of baseball and social change.

If you enjoyed this mini sports quote quiz, you many enjoy this sports trivia game, where you’ll find trivia questions on sports quotes, record breaking feats, nicknames of athletes and more.