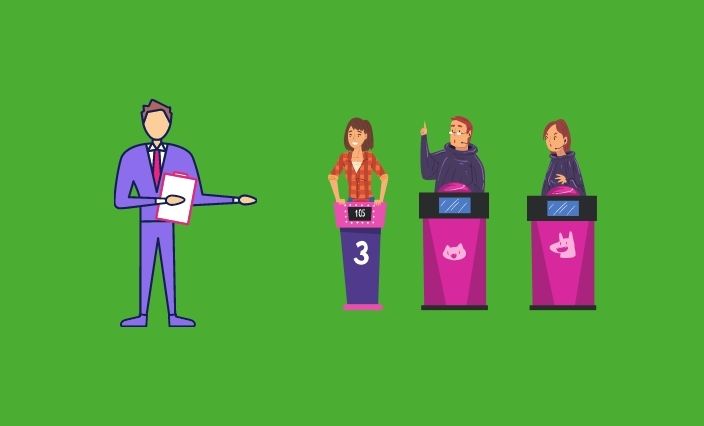 Jeopardy! Hosts Then and Now

With the passing of Alex Trebek on November 8, 2020, the producers of Jeopardy! Had a decision to make. They needed to keep the popular trivia quiz show running without alienating viewers. They made a decision to keep the show running with a series of familiar faces while they line up a permanent host. The first familiar face is long time winner, Ken Jennings. He’ll be serving as interim host of the popular trivia quiz show starting on January 11, 2021.

Alex Trebek hosted the game show for 36 years, over 8200 episodes, before succumbing to his battle with pancreatic cancer at the age of 80.

Who was the first ever host of Jeopardy?

Many think Alex Trebek was the only host, but that’s incorrect. Art Fleming was the original host of Jeopardy!. When the show initially aired in 1964 it went by the name What’s The Question?, it later transitioned into The All-New Jeopardy in 1978, and then transitioned to Jeopardy! in 1984 when Trebek took over as host.

Who is Ken Jennings?

Ken Jennings is the whiz who holds the record for the longest winning streak on Jeopardy!, he accumulated 74 consecutive wins on show and has come back for repeated visits in various Jeopardy! Tournaments of Champions.  His celebrity status helped him launch a career as an author, and public speaker. He’s also quite active on social media, particularly Twitter.

Who else will guest host Jeopardy?

Mike Richards who is the current producer of the trivia game show, has been tight lipped about it. But has said there will be some recognizable faces as well as some surprises too.  Richards and Trebek had spoken about the possibility of Jennings being a host and Trebek gave it his blessing. Trebek also provided criteria for Richards to look for in finding a new permanent Jeopardy! host. Some of that criteria includes being able to accurately articulate clues without giving away anything that would sway contestants. Credibility and relatability are also high on the list as the host needs to be able to connect with the audience without being the star of the show.

So for now we hang tight, we’ll watch Trebek’s final few recorded episodes which will continue to air through January 8, 2021. We’ll tune in to see Ken Jenning’s take the podium as host, and then look forward to seeing other interim hosts the show has lined up. One thing that we know for sure is, Trebek’s shoes will be hard to fill.