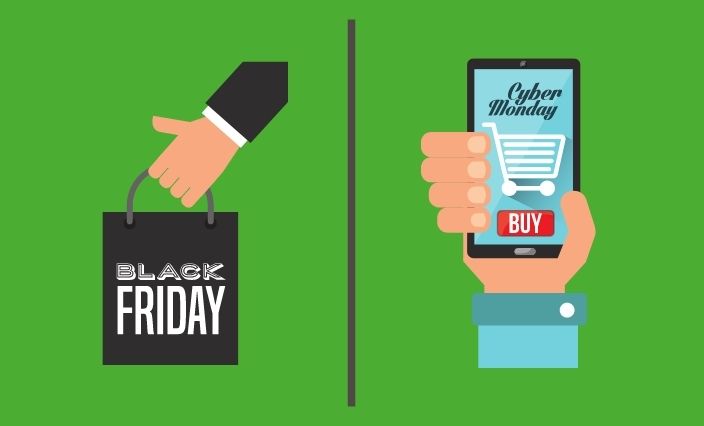 Americans love their shopping. The weeks between Thanksgiving and Christmas represent the busiest shopping season of the year. Two days in particular make up a large portion of the sales for retailers, Black Friday and Cyber Monday. Below we’ll take a look at origins and trivial facts for each coined holiday.

What is Black Friday?

Black Friday is the nickname for the day after Thanksgiving. Many retailers and shoppers see this as the official kickoff to the Christmas and holiday shopping season. Many retailers have a tradition of slashing prices and large ticket items, which brings out deal hungry shoppers.

Note, Black Friday has also been a term used to describe the day the US gold market crashed on September 24, 1869, creating a major financial crisis on Wall Street.

Where does the name Black Friday come from?

The term black relates to the fact that it’s the day many retailers start to make a profit. They get into the black and out of the red as sales rapidly increase and consumer spending rises.

How long has Black Friday been a holiday tradition?

The shopping holiday really started to get traction in the 1950s in Philadelphia.  Shoppers would come out in droves to get deals on holiday items. The police force had to be fully staffed to both manage the somewhat unruly crowds and be on lookout for shoplifters who didn’t want to pay for their merchandise.

When did Black Friday become so important in America?

In the 1980s it began to play a larger part of the Thanksgiving weekend and holiday traditions. Retailers commonly used print media like newspapers and postcards to showcase their sale items. The savvy retailers would drum up campaigns to create anticipation to keep consumers anxious about what items would be on sale. It wasn’t unusual for a retailer to stage an accidental leak of their sales information to help drum up even more excitement.

How did the internet impact Black Friday?

Online shopping has certainly taken some of the crowds out of the stores on Black Friday as consumers know it’s often easier to shop from the comfort of home. But while the shopping location has shifted some, many shoppers still like the experience of in person shopping in their local big box retailers and small shops.

How big was the decline of instore Black Friday sales in 2020 due to the Coronavirus pandemic?

When compared to 2019, Black Friday instore sales declined by 52%. Many shoppers took to online shopping for gifts instead and were naturally socially distant.

What home service industry has their busiest day of the year on Black Friday?

Plumbers! They are typically clobbered with service calls due to clogged pipes after the hosts serve guests a massive feast.

What is Cyber Monday?

It’s a day when online retailers slash their prices and showcase their deals much like their in-store counterparts do on Black Friday.  Cyber Monday is a term the National Retail Federation (NRF) gave to the Monday after Thanksgiving.  The NRF first coined the term, Cyber Monday, in 2005.

What kind of products are sold on Cyber Monday?

There’s no limit to what you can buy on Cyber Monday, yet there is a focus on technical products like laptop computers, televisions, cell phones, fit bits and other gadgets that make good holiday gifts.  Amazon is one of the big players in Cyber Monday deals and they often have discounted pricing on gifts under $10 to large ticket items over $1000.  Other ecommerce companies that typically participate are Walmart, Target, Dell and Apple.

Which day has better sales, Black Friday or Cyber Monday?

It depends on what you’re wanting to buy. Historically there are better deals on large ticket items on Black Friday. But often times those deals are for limited quantities, which means you have to be an early shopper to snag up an in demand product with a price that’s slashed.  Cyber Monday retailers have taken a page out of the same book with limited quantities on highly sought after products...but it's just much less intense for online shoppers.

Does Black Friday bring in more revenue than Cyber Monday?

Nope! In 2019 sales on Cyber Monday outpaced Black Friday by over $2 Billion. Even though many consumers are back to work on Cyber Monday, the data shows they’re finding time to shop online at their favorite ecommerce sites.  In 2020 the impact of Covid-19 accentuated online sales as many shoppers preferred to keep it safe and shop from their computers.

How many shoppers particpated at Thanksgiving weekend retailers, both online and in-store?

According to the NRF, over 184 million people shopped for deals over the holiday weekend.